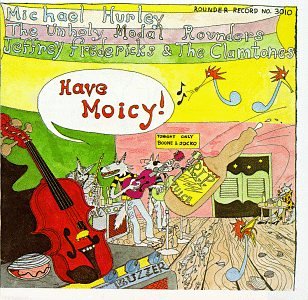 Just so you don’t need to go anywhere else for it:

A conversation (with myself):

“I can still remember the first time I heard Have Moicy!”

“You’ve told this one before.”

“I was a sophomore in high school then, my dad and I would talk music all the time.”

“’A lot of people thought it was weird…’”

“A lot of people thought it was weird to be taking musical advice from my dad, especially at an age when I was supposed to be rebelling or whatever. That’s what I heard on Frasier, anyway.”

“Yeah I know, but your dad owned every Nirvana record before you did, along with Pavement and Sonic Youth.”

“Exactly, and he was right on all of those, why shouldn’t I trust him again? At that point we only had Have Moicy! on vinyl, and my dad would get a kick out of having me sit in the family room while he played me something from his massive collection of records. So I sat and listened and almost immediately started to laugh. ‘Is this supposed to be a funny? Or is it supposed to be a real album?’ ‘Why can’t it be both,’ he replied.”

“And I was floored! I had always assumed a dichotomy, maybe because of Weird Al or something, but from that moment on everything was clear. From the moment I heard Peter Stampfel start singing his blue grass, bohemian version of Midnight in Paris I was hooked. The first song I ever learned how to play on guitar while singing at the same time was Sweet Lucy. I spent years of my life deciphering the lyrics to Jackknife/The Red Newt.”

“The lyrics weren’t that tough.”

“Well whatever. I would play the album for anyone who I hung out with, if they didn’t immediately like the album I would switch to The Slurf Song, which captured our naive minds, and a new fan was born.”

“‘I make a wish for a potato’, you’d shout from the lunch line.”

“No one else would.”

“That only made it funnier! When I finally bought the CD we’d pass it between friends like it was something to be hidden, not that it was diabolically subversive, but that people didn’t understand.”

“So you’ve been pretentious for decades and you’re using it as a sales pitch, is that what this is building to?”

“They finally fucking re-released and re-mastered it! On 180 gram vinyl! Do you know how long I’ve been waiting for this to happen? This is a must buy! Its like someone read my blog!”