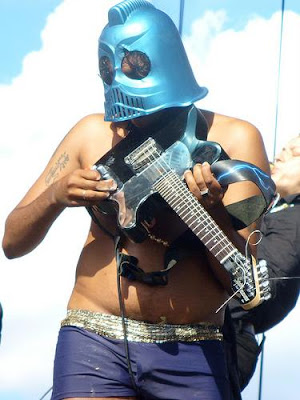 McCarren Park is a very cool place to see a show. Free, an empty chipped up pool, slip n slide, dodgeball, and beer. The show wasn’t loud enough, but my ears may have been split open from the night before at Monotonix. I still have a high pitched fuzz that comes when the traffic gets just soft enough on my block. It was hot, so Mike, Evelyn and I did what any sane person should do, run the slip n slide a few times and drink some beers. The Tall Firs were first and they were very boring. Soon enough, the shrines were out there, from what I gather, a collective Euro band with French Germans and whoever else he’s friends with. Each wore all black with big gold necklaces. We waited a few and then King Khan came out in a cape, silver hat and necklaces with shrimp on them. This was the first of his costumes for the show. He wore a blue helmet later and even a KKK hood while he goose-stepped around stage.

The only way to describe the Shrines show is if you saw the stooges fronted by James Brown. Something like that. Here’s what King Khan did- all in a 45 or so minute set:

All the time singing and dancing and jumping on the crowd. Great show.

Next up was Deerhunter so as the masses crowded the stage we decided to play dodgeball. We got there and the fascists wouldn’t let me play in flip flops so I put myself out there and walked around asking my fellow man for a pair of shoes to play in. No luck. Fucking hipsters and their bright shoes. So I waited for Mike to play and took his way-too-big-for-me shoes and flopped into the pen for dodgeball, all the time deerhunter boring the crowd with whiny love songs (I only imagine- I really have no idea). I couldn’t understand their drone. I got one person out in dodgeball but then was hit with 2 balls at the same time. The bastards were gunning for me! If I had played during the King Khan set there is no doubt I would have taken down the entire other team myself, but nope, I had blah blah blah deerhunter for my inspiration, which was only fitting for my walk to the sidelines after being pegged out.

This is getting long so I will only mention one thing that sums up the entire Black Lips set: chiwawa solo! 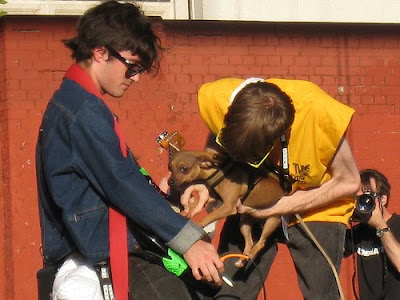