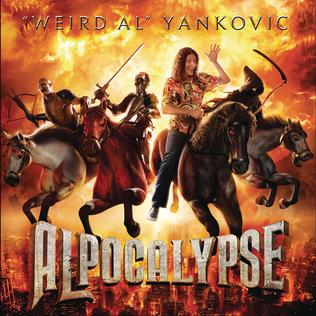 A word of caution before reading this post: there will probably be more “Al” themed puns than you have ever read or will be comfortable with. You have been warned.

Is this 6th grade? No? You say I’ve been out of grade school for over a decade and a half? Well I can honestly say I never thought I’d be this obsessed with another AL-bum by the modern day king of the parody and the polka Weird Al Yankovic. The instant I saw the cover art and knew the title, Alpocalypse, I was sold. I’m immature you say? AL-l right, I’ll admit that, but maybe there’s something more to this other than that I’m regressing. Whatever the reason, I’m laughing all the way.

Ok, let me get one thing straight: if you’re not AL-ready a Weird Al fan this probably won’t change your mind. If you know what you are about to get yourself into and have been waiting since 2006 for another proper Weird Al album then trust me the wait was worth it.

Released exactly one month after what was being predicted as the true apocalypse, it starts with a parody of the current pop princesses herself. Taking shots at Gaga in “Perform This Way,” and even going so far as to include an “Express Yourself” reference during it. Jokingly of course, in the way that Weird Al AL-ways has.

“CNR,” a White Stripes style parody about the late Charles Nelson Riley is hysteric-AL and rocking in a way that would make Jack White call Meg back up to get the band back together. The Doors themed “Craigslist” is sure to stir up some nost-AL-gia with the help of former Doors keyboardist Ray Manzarek. “Stop Forwarding That Crap to Me” is sure to have you crack a smile and “Party in the CIA” may just make you wonder if you missed something in the Miley Cyrus original.

The polka medley “Polka Face” is one of the best to date and possibly the best track on the album. Honestly every time I hear it I burst into laughter, ask the people in the train car or who sit near me at work. It’s awkward for them great for me. If the polka transition of “Blame It” into “Replay” into “Down” into “Break Your Heart” into “Tik Tok” doesn’t put a smile on your face you may be a robot, or an AL-tomation (that one’s a stretch).

Easily in the running for best track on the album is “Another Tattoo,” a parody of “Nothin’ On You” by B.o.B. featuring Bruno Mars, about well… I’m sure you can guess.

I take it back, the best track on the album (poss-AL-bly because of all the food references) is “Whatever You Like” a parody of “Whatever You Like” by T.I. about hard times falling on a couple but still spending all the cash you have, but reason-AL-bly. “Yeah you like top ramen, need top ramen. Got a cupboard full of ‘um I’ll keep ‘um coming. You want it I got it go get it just heat it dump the flavor pack it on it eat it” proves to me that he still has it. But he didn’t have to sell me on that.

It’s not without its faults though. The Hanson style parody “If That Isn’t Love” is a few years too late and the Queen styled “Ringtone” may fall a bit flat, but the rest is AL-mazing.

The album is available in a variety of formats including both a regular CD version and a Deluxe version, the latter of which includes a DVD featuring videos for 10 of the 12 songs on the album (“Perform This Way” is missing and “Polka Face” doesn’t have a video yet). And for all of you AL-ficionados this will AL-so be the first Weird Al album available on viny-AL since 1989’s UHF soundtrack. The AL-p will be AL-vailable (that’s it I’m done, I promise) on July 19th. Mark your c-AL-anders (I lied), celebrate now because you can and always remember no matter where you are and what you do “the polka don’t stop.”